On October 14, 1964, Martin Luther King Jr. became the youngest recipient of the Nobel Peace Prize, which was awarded to him for leading nonviolent resistance to racial prejudice in the U.S. The following is an excerpt from Dr. King’s Nobel Lecture on December 11, 1964. 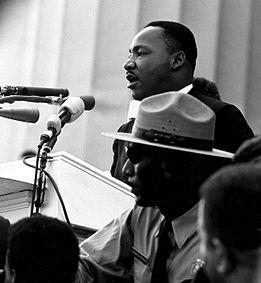 “The word that symbolizes the spirit and the outward form of our encounter is nonviolence, and it is doubtless that factor which made it seem appropriate to award a peace prize to one identified with struggle. Broadly speaking, nonviolence in the civil rights struggle has meant not relying on arms and weapons of struggle. It has meant noncooperation with customs and laws which are institutional aspects of a regime of discrimination and enslavement. It has meant direct participation of masses in protest, rather than reliance on indirect methods which frequently do not involve masses in action at all.

Nonviolence has also meant that my people in the agonizing struggles of recent years have taken suffering upon themselves instead of inflicting it on others. It has meant, as I said, that we are no longer afraid and cowed. But in some substantial degree it has meant that we do not want to instill fear in others or into the society of which we are a part. The movement does not seek to liberate Negroes at the expense of the humiliation and enslavement of whites. It seeks no victory over anyone. It seeks to liberate American society and to share in the self-liberation of all the people. 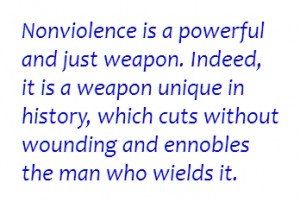 Violence as a way of achieving racial justice is both impractical and immoral. I am not unmindful of the fact that violence often brings about momentary results. Nations have frequently won their independence in battle. But in spite of temporary victories, violence never brings permanent peace. It solves no social problem: it merely creates new and more complicated ones. Violence is impractical because it is a descending spiral ending in destruction for all. It is immoral because it seeks to humiliate the opponent rather than win his understanding: it seeks to annihilate rather than convert. Violence is immoral because it thrives on hatred rather than love. It destroys community and makes brotherhood impossible. It leaves society in monologue rather than dialogue. Violence ends up defeating itself. It creates bitterness in the survivors and brutality in the destroyers. In a real sense nonviolence seeks to redeem the spiritual and moral lag that I spoke of earlier as the chief dilemma of modern man. It seeks to secure moral ends through moral means. Nonviolence is a powerful and just weapon. Indeed, it is a weapon unique in history, which cuts without wounding and ennobles the man who wields it.

I believe in this method because I think it is the only way to reestablish a broken community. It is the method which seeks to implement the just law by appealing to the conscience of the great decent majority who through blindness, fear, pride, and irrationality have allowed their consciences to sleep. 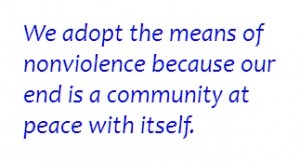 The nonviolent resisters can summarize their message in the following simple terms: we will take direct action against injustice despite the failure of governmental and other official agencies to act first. We will not obey unjust laws or submit to unjust practices. We will do this peacefully, openly, cheerfully because our aim is to persuade. We adopt the means of nonviolence because our end is a community at peace with itself. We will try to persuade with our words, but if our words fail, we will try to persuade with our acts. We will always be willing to talk and seek fair compromise, but we are ready to suffer when necessary and even risk our lives to become witnesses to truth as we see it.

This approach to the problem of racial injustice is not at all without successful precedent. It was used in a magnificent way by Mohandas K. Gandhi to challenge the might of the British Empire and free his people from the political domination and economic exploitation inflicted upon them for centuries. He struggled only with the weapons of truth, soul force, non-injury, and courage.

In the past ten years unarmed gallant men and women of the United States have given living testimony to the moral power and efficacy of nonviolence. By the thousands, faceless, anonymous, relentless young people, black and white, have temporarily left the ivory towers of learning for the barricades of bias. Their courageous and disciplined activities have come as a refreshing oasis in a desert sweltering with the heat of injustice. They have taken our whole nation back to those great wells of democracy which were dug deep by the founding fathers in the formulation of the Constitution and the Declaration of Independence. One day all of America will be proud of their achievements.

I am only too well aware of the human weaknesses and failures which exist, the doubts about the efficacy of nonviolence, and the open advocacy of violence by some. But I am still convinced that nonviolence is both the most practically sound and morally excellent way to grapple with the age-old problem of racial injustice.”